The spot to windsurf in Barbados is the area of Silver Sands, where the conditions are challenging yet forgiving and where circumstances are unbelievably convenient - and Inchcape is located right on the edge of Silver Sands beach. You only rig up once and store your equipment just a few steps from the water. Shower, shade, relaxation area, everything combined right at your house, right on the spot, which is so unique. We have made it possible for you to enjoy this luxury windsurfing experience at our gorgeous vacation home, Inchcape in Silver Sands, on the Caribbean island of Barbados. Sounds to good to be true?!? Maybe it does, but this dream will come true for you when you decide to come and stay with the people who discovered Silver Sands as a world-class wave windsurfing spot. 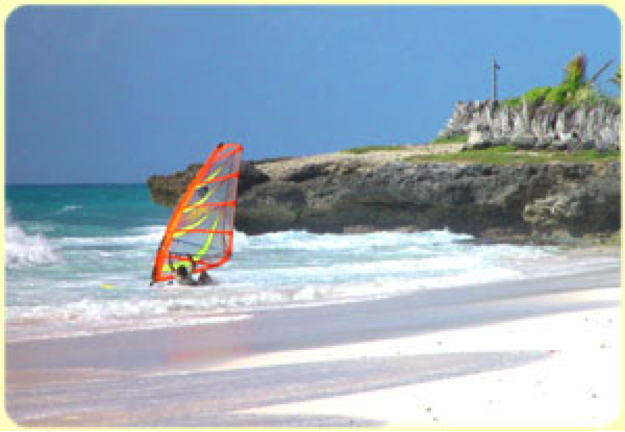 In 1978 Rosi and Wolfgang, your hosts at Inchcape, were the first people to ever sail at Silver Sands' reef formations. Their team work, commitment and enthusiasm, Wolfgang as a windsurfer and World Cup competitor as well as a journalist for all major windsurfing publications and Rosi as a windsurfing photographer and judge in Waveriding World Cups, started the development which finally led to establish Silver Sands / Barbados in a high ranking position on the windsurfing world-map. And who could tell you more about the secrets of windsurfing in Barbados than the people who discovered this spot? Besides Hawaii, Barbados is one of the best wave windsurfing spots of the world. The chances of wind are high and the waves are perfect for jumping and wave riding in side shore winds. Not only wave cracks, speed freaks but beginners as well will find dream conditions in the 27°C warm waters of the South Coast on this most easterly situated Caribbean island. 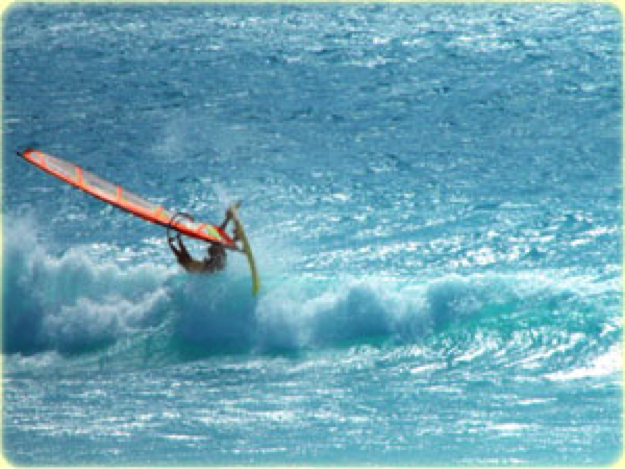 The best time to spend your windsurfing vacation in Barbados is the period of time when the cooling trade winds blow with high consistency over the island's shores, namely from mid November until the end of June. But that does not mean the rest of the year couldn't be as good or even better. During the hurricane season, which starts in June and last all the way through to November all sorts of conditions are possible.

The waves in Barbados are by far not as mighty and powerful as in Hawaii, although they can reach mast high and above. They are however of excellent quality while still forgiving. Compared to Hawaiian waves, they are slower and not as powerful but as perfect to be good enough to let a top wave professional have a good time. On the other hand, wave beginners don't have to fear anything. Get information from a local before your first ride out and you will be just fine.

To describe Silver Sands in one sentence: it is a wonderful spot for beginners and top guys alike.

Our sailable reefs and the beaches are never overcrowded because it's just too big for that. The wind is almost always coming in from an easterly direction, which is perfectly side shore. That means on the South coast you are sailing with the wind blowing from your left when going out (port-tack) and in the North and East of the island it's the other way round. 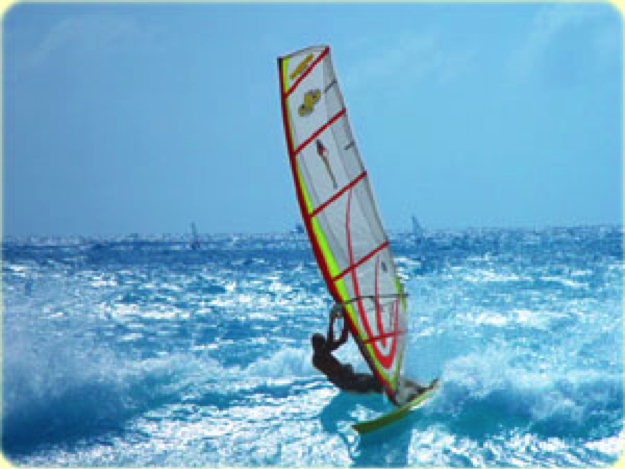 For board rentals and spare parts Brian Talma's action shop is located at Silver Rock beach, the beach next to Silver Sands Beach, and only a few minutes walk away from the Inchcape Seaside Villas.

Some information on what has happened in the past:

from 1978 to 1991 Barbados had windsurfing conditions that were outstanding as far as wind and waves were concerned. From November to April, chances to sail your short board were in the area of 75% to 80%. In 1992, 1993 and 1994 nature taught us a good lesson, which should sink into every windsurfer's mind: there is nothing we can claim or take for granted. Enjoy when it's there, but still enjoy your time if it shouldn't be happening. By the way: Barbados is the No. 1 spot for just that.

In 1996 wind and waves were back and have been above average since. The conditions were fantastic in 2002 and 2003 and didn't let us down again since. Wind and Waves have been incredibly good in 2006, 2007 and 2008 and over Christmas / New Year 2008-2009 conditions for wind- and kite surfing have been the best for the last 20 years, simply way beyond any optimistic expectation. Conditions in 2010 have been reliable and good, but not necessarily spectacular, but wind and waves were consistent throughout the 2011, 2012 and 2013 became one of the best wind and waves seasons ever. Almost every day in between November 2013 and March 2014 was a good day to kite or windsurf. Nothing however can beat the conditions in the 2013-2014-winter season when windsurfing and kite surfing were possible almost every single day between November and April. Since then until late 2020 wind and wave conditions have been very consistent and good.